I am not going to be posting for the next few weeks as I have an upcoming oral surgery in two days.  Prayers would be appreciated, and lets hope that it turns out well. 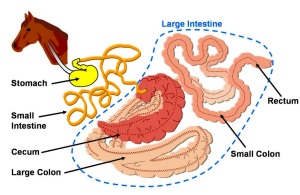 Now that I’m done with mouths, let’s move on to a “more interesting” subject,  Intestines!  Namely, the horse intestines.  True digestion begins in the small intestine when it receives liquefied feed material from the stomach. With assistance from the enzymes secreted by the pancreas, the small intestine is the primary site for digestion and absorption of sugar and starch (a complex sugar in plants), protein (that has been initially digested in the stomach), and fat. The small intestine is also the site for absorption of fat-soluble vitamins (A, D, E, and K), calcium, and phosphorous. The large intestine in the horse works like a large fermentation vat in which tremendous numbers of bacteria and protozoa live to facilitate further digestion of plant fiber by their production of enzymes that are capable of breaking down this component of the equine diet (the horse itself does not have these enzymes). This fiber breakdown produces substances called “volatile fatty acids” that can then be absorbed and used by the horse for energy.  A second important function of the large intestine is water absorption. This function occurs very efficiently such that by the final step in the small colon, the waste material not used by the horse is formed into fecal balls. These are subsequently passed into the rectum for evacuation through the anus.  There, wasn’t that fun?  I sure had fun writing it. 😉

To see some horse intestines, click here to watch my video.

This week we will look at bird bills, at first I was just going to focus on chicken beaks, but then I decided to broaden my spectrum.  The beak, bill, or rostrum is an external anatomical structure which on birds is used for eating, grooming, manipulating objects, killing prey, fighting, probing for food, courtship, and feeding young. Although beaks vary significantly in size, shape, and color they share a similar underlying structure. Two bony projections—the upper and lower mandibles—are covered with a thin keratinized layer of epidermis known as the rhamphotheca. In most species, two holes known as nares lead to the respiratory system.  Inside the mouth, the oropharynx, contains the tongue, glottis, choana, palate, salivary glands, esophagus, opening of the avian equivalent of the Eustachian tubes (the pharyngotympanic tubes), and laryngeal mound.

The tongue is adapted for collecting food, manipulating food and swallowing. For example, the tongue of the birds in the lory and lorikeet families is the most specialized of the parrots. The lory tongue is called a ‘”brush-tongue,” which refers to a cluster of elongated papillae that are normally only visible when the bird is feeding on liquid or soft foods, or when preening another bird.  At the base of the tongue, where the glottis and the laryngeal mound are located. The larynx of mammals is used for vocalization, but it is the syrinx, located down much further, that is responsible for sound production in birds.  Bird beaks are interesting structures all right, although usually not something you want near your face.

English: Macro photo of a cat cleaning itself, showing the hooked papilla on the tongue. (Photo credit: Wikipedia)

The tongue is a muscular organ that has several functions, the main ones being the guiding of food and water into the mouth and for the taste sensation. The tongue assists in the chewing and swallowing of the food as well. The tongue also plays a role in reducing body temperature in the cat. Dogs are well known for panting, but when the ambient temperature is particularly hot cats will also pant. As air passes over the tongue, the air is cooled. Saliva augments this process as it evaporates.  The tongue of a cat differs from that of a dog in several ways. In the center of the tongue are papillae – small hair-like projections that act as small hooks. They are responsible for that “sandpaper” feel when a cat licks our skin. These papillae are made of keratin, the same material found in human hair and fingernails. The papillae serve several purposes. They are important in grooming the fur. And also assisting in gathering and holding food inside the mouth. Specialized papillae at the tip and the sides of the tongue play an important role in taste sensation. Studies have shown that the feline tongue can sense texture as well as flavor.  This may explain why some cats prefer dry foods based on their shape. The feline tongue is very sensitive to temperature, and studies have shown that cats prefer food served at room temperature over chilled or warmed food.  Which is part of the reason that cats are so picky.

To see papillae under a microscope, click here to watch my video.

Now we will look at a carnivore’s mouth, the cat mouth.  Cats are “diphyodont”, which means they have two sets of teeth, the deciduous teeth shed and are replaced by the second, permanent set. Kittens are born with no teeth. At about 3 to 4 weeks of age, the deciduous teeth begin to erupt. By 6 weeks of age, all 26 deciduous teeth are present. At 4 to 5 months of age, the deciduous teeth are lost and the permanent teeth erupt. By six months, all of the adult teeth will have erupted.  Adult cats have four types of teeth. The incisors, canines, premolars, and molars. In the upper jaw (the maxilla), there are 6 little incisors, two canines, three premolars, and one molar. The incisors are used mainly for picking up objects and for grooming. The canines are used for holding prey, and for slashing and tearing when fighting. Premolars function mainly for breaking food into small pieces, as well as for carrying and holding. The molars have flat surfaces and are used to grind food into small pieces. In the lower jaw (the mandible) you’ll find the same number of incisors, canines and molars, however, there are only two premolars instead of three. The total number of permanent teeth in a cat is 30. Ultimately, cat’s mouths are perfect for the carnivorous little felines.