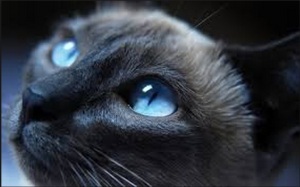 Now I’m going to focus on feline eyes.  Cats, like dogs and many other animals, have a tapetum lucidum.  Which is a reflective layer behind the retina that sends light passing through the retina back into the eye.  While this improves the ability to see in darkness, it appears to reduce net visual acuity, thus detracting when light is abundant.  In very bright light, the iris closes to a slit,  reducing the amount of light on the sensitive retina, and improving depth perception.  The tapetum and other mechanisms give the cat a minimum light detection threshold up to seven times lower than that of humans. Variation in color of cats’ eyes in flash photographs is largely due to the reflection of the flash by the tapetum.  Cats have a visual field of view of about 200°, while humans only have 180°.  But their binocular field (overlapping the images from each eye) is narrower than that of humans.  As with most predators, their eyes face forward, affording depth perception at the expense of field of view.  Field of view is largely dependent upon the placement of the eyes, but may also be related to the eye’s construction. Instead of the fovea, which gives humans sharp central vision, cats have a central band known as the visual streak. Cats can see some colors, and can tell the difference between red, blue and yellow lights, as well as between red and green lights. They are also able to distinguish between blues and violets better than between colors near the red end of the spectrum.  I’ve noticed a “win some lose some” pattern with different kind of eyes,  Humans can’t see well in the dark, cats can’t see all the colors, And chameleons can’t focus on two different things.  But that’s for next week.

To see the inside of a cat’s eye, click here to watch my video.

One thought on “Catty Colors”